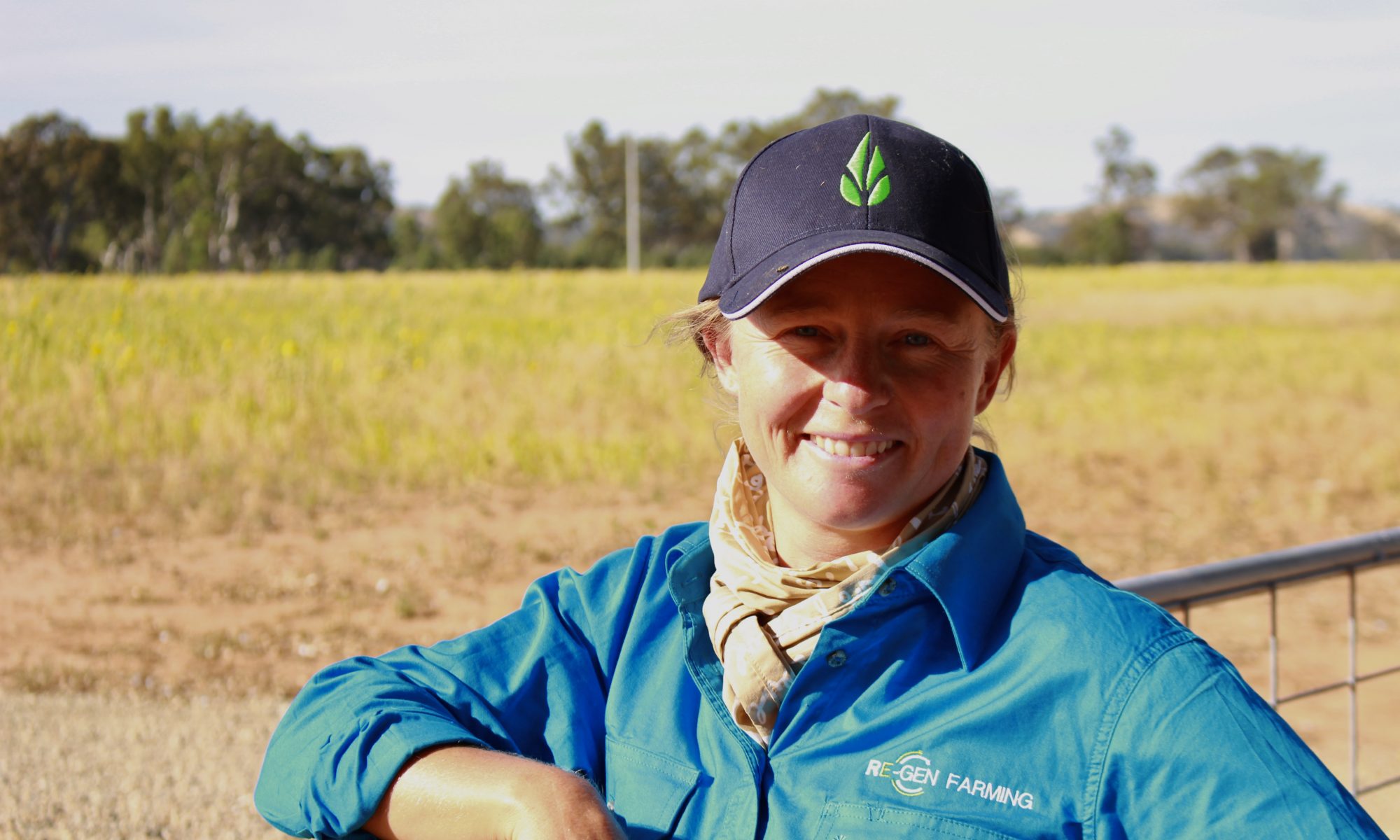 2022 is an exciting year for Re-Gen Farming, this year we welcome Zoe Crouch to the team. Zoe is currently studying a degree in Science through Southern Cross University, majoring in Regenerative Agriculture, making her a great fit to our role of supporting farmers in their transition to regenerative farming.

Zoe hales from a little hamlet called Landsborough West, on the edge of the Wimmera and the Pyrenees Ranges in Western Victoria. It is a mixed farming area which receives around 450mm rainfall a year.

Growing up on a farm in Western Victoria, Zoe had spent time working in woolsheds, a year in outback Qld and managing an Artificial Insemination centre in Hamilton for five years. This background has allowed Zoe to develop a large network of farmers and wool growers, along the way she has learnt a great deal about sheep fertility and the industry in general.

Having also worked on large stations and properties in senior roles managing livestock, Zoe now manages her own property with husband Luke (Crouch) which they purchased in 2007. In between all this Zoe has completed the RCS Grazing for profit course, the Nicole Masters Integrity soils 10-week course and she has an Ecotherapy Certificate (short course). Along with all this Zoe was Deputy Editor of Working Stockdog Magazine for four years.

Luke and Zoe’s children are now at school which has given them more time to concentrate on improving soil health and creating a diverse ecosystem on their farm, allowing Zoe to put her knowledge and learnings into practise.

Zoe believes regenerative/biological agriculture is like a huge toolbox, providing farmers with so much more at their disposal, providing farmers with more choices about where their journey will take them. Zoe is concerned about the cracks showing in the current farming model and the continual rise in input costs really limits the profit margin, Zoe believes re-gen ag provides farmers an alternative farming model. Zoe says we are only just starting to scratch the surface of what can be achieved within regen/biological systems, and it’s not limited to soil health; the ripple effect is far-reaching to farmer health, livestock health, community regeneration and resilience, improving the life/work balance we often crave and increasing the consumer knowledge around food and its source.

According to Zoe “Agriculture is life!! Without farmers, we don’t eat.” She is passionate about supporting the farmers out there looking for alternative farming methods. Zoe understands there are a lot of people wanting to source nutritious, wholesome, ethically and locally grown foods. But she believes the gap between the farm and the table has grown exponentially and now we need to bridge that gap, she sees regenerative/biological farming as the way forward. She says the evidence is quite clear the health of the human population runs parallel with that of our soils and wants to be part of the solution to improve soil and human health.

Zoe believes the future of farming is bright but swinging in the breeze, and feels there is a great opportunity for agriculture moving forward to ensure that its principles fulfill the regeneration of the landscape, ecology, people, communities and culture.

Zoe is looking forward to meeting many of you in the near future, working with you to set goals and aspirations and watch the landscape change as mindsets alter, a parallel which she always finds amazing!